There are some case we need to select random records in mysql. The normal way I did see many developers have used is ORDER BY RAND(). But they might not recognize that if the number of records increase, the query is extremely slow due to the fact that it must […] 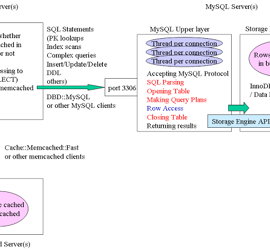 This article describe an example of using MySQL as a NoSQL in which the application can exceed 750,000 qps on a commodity server. This is originated from http://yoshinorimatsunobu.blogspot.com/2010/10/using-mysql-as-nosql-story-for.html UPDATE: Oracle officially released memcached daemon plugin that talks with InnoDB. I’m glad to see that NoSQL+MySQL has become an official solution. It’s still preview release […]